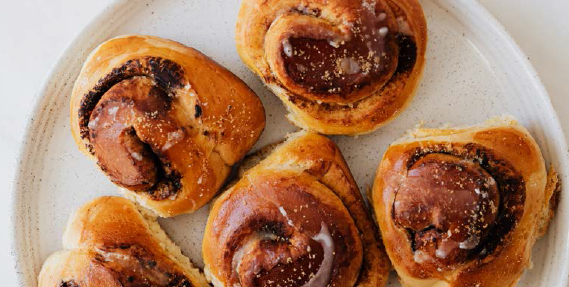 I know, it sounds complicated, but in the end it really isn’t.

Stay with me here and I’ll explain.

Once upon a time in Denmark (Sorry, I am legally obligated by the tourism board to start like that) there was a baker. He was an ambitious young baker with grand ideas of doing new and interesting things. Thinking new isn’t easy in a bakery that had existed since 1652 though and which had always been under the strict rules of the local bakers guild at that.

However, the young Niels Albeck who was only in his early 20’s, and yet had become a master baker, bought the old bakery and took a trip to Vienna with the intention of learning more and advancing his craft. After all, a bakery is expensive and he kneeded the dough. (Sorry, couldn’t resist).

In the early 1840s he returned and opened the bakery in Kultorvet in Copenhagen and called it Wienerbageren or The Viennese bakery. Here he baked pastries of the Viennese type, but quickly began to change them to suit his local audience. More sugar was needed, more butter, the dough was rolled out in many fine layers, in a lamination technique learned from the Viennese bakers, but more sugar, remonce cream and of course, even more butter suited the Danish tastes.

Even the king (Christian the 8th) and queen liked the new pastries and had them delivered directly by the baker himself. The new baked goods became all the rage and the baker lived happily ever after (or at least until he died at the age of 63).

As the 19th century progressed more cakes and pastries were added to the list of classic Danish baked goods. All of them still known under the catch-all term of Wienerbrød.

As the 19th century drew to a close a number of Danish people emigrated to the new world and some of them certainly took the tradition of the pastry with them. However, it seems to have been the particular introduction of one baker to president Wodrow Wilson that opened up an import market for the baked goods which made them truly popular in the United States.

Bakers all over the world bake their own version of the “Danish Pastry today which does not look much like the pastry as found in Denmark. They are in fact so far from the original that most Danes do not recognise them or even know what they taste like.

In Denmark the most classic pastries are:

Where can I find it?

Well, you should taste them in Denmark of course. Sadly the story of the Viennese Bakery in Kultorvet does not have a happy ending and the building is now an H&M and Sports Equipment shop. But there are many a fine bakery to be found in Copenhagen.

Here are a few bakeries that you cannot miss:

This is a controversial topic, and there will be those who disagree with my retelling. Therefore I have decided to include references: